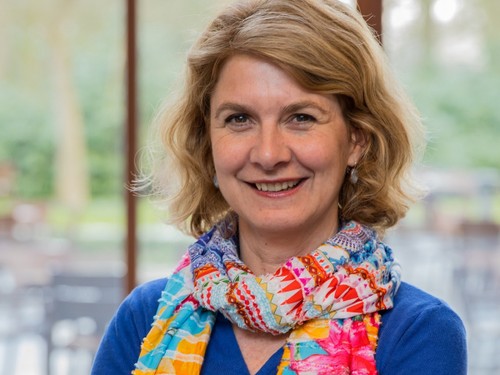 Yvonne studied speech-language pathology and had her own practice as a speech therapist. Later studied language and cultural studies at the University of Tilburg. Did her graduate research on the influence of native language pronunciation on foreign language pronunciation, so naturally a job at Regina Coeli was an interesting one for her. Began as a freelancer and quickly had an indefinite contract.

‘I pay a great deal of attention to articulation and intonation in my lessons. People who learn a language want to be understandable and preferably speak without an accent. We can make a big difference in this area. I also point out when I notice that a student is using his or her voice, breath or posture in way that’s hindering him or her. Speaking a language is certainly not only a linguistic matter. Someone who says all his or her sentences as if they are questions comes across as very insecure. I ensure that my lessons are safe and inviting. That way, people have the all the space they need to learn.’