Language Institute Regina Coeli has a team of language trainers Arabic. One of them is Lamees Meshref. She introduces herself. 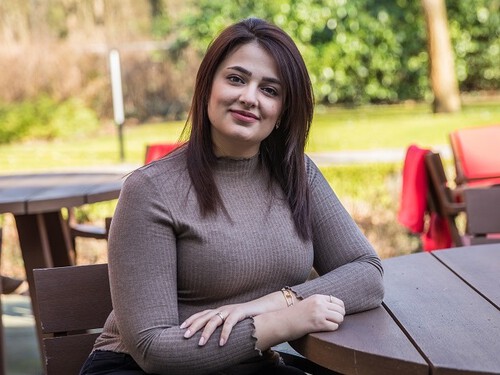 Lamees studied Arabic literature at the University of Damascus and then got her master’s degree in Arabic culture. One day, she would like to write a book on the subject. In the meantime, she is enjoying teaching Regina Coeli students more about her native language and the culture she grew up in.

‘Arab culture isn’t only the culture of a religion. Not everyone in the Arab world is Muslim or Christian. For example, ‘inshallah’ is an Arabic word. It literally means ‘God willing’, but it’s actually a fixed expression used to express hope and optimism. It’s used in a range of situations, such as when you approve or disapprove of something but don’t want to say so directly, and when you’re being a bit non-committal about plans.

Another example of something that’s typically Arab is that you can speak negatively about things, but never about people. Our gestures are different too. The gesture that Dutch people use for quotation marks means ‘very important’ for us. This, too, you learn when you’re with us. Learning to communicate is about more than just learning to speak a language.

The Arabic language is very poetic. In English, we say ‘good morning’. With ‘Sabah en-noor’, we wish each other ‘a morning full of light’.

I sometimes compare the Arabic language with the sea. It’s so vast and contains so much that you can never fully understand it. At the same time, it’s is a very logical language. By following the logic, we can teach our students to speak the language well and quickly.’