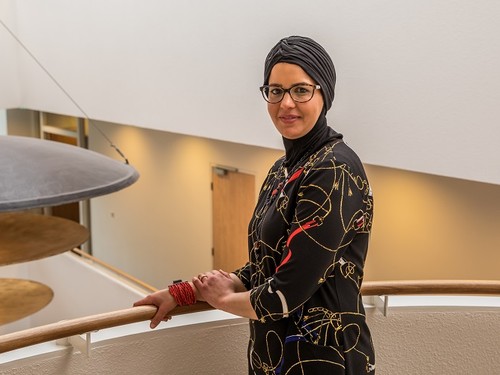 Touria Benali Agrandi comes from Melilla, one of two autonomous Spanish cities in Morocco. She grew up surrounded by a colourful mix of languages, but the splendour of Arabic captivated her from an early age. Touria studied Arabic language and culture at the University of Leiden and received her master’s degree in Middle Eastern studies from Radboud University in Nijmegen. She now works as an Arabic language trainer at Regina Coeli and as an interpreter and consultant in the field of Moroccan family law.

‘Arabic is an incredibly rich language with a rich range of vocabulary and a great deal of depth. Sometimes you have to think a bit longer before you understand exactly what is being said. I love Arabic poetry, especially the Al-Andalus poets.

Even in daily life, things like small talk are more flowery in the Arab world. If I greet a colleague with ‘good morning’, that colleague will try to reply with something more beautiful.

Many people think Arabic is a difficult language to learn, yet once you understand the logic of it, you can easily learn the language. You can understand Arabic writing in a single day. The most important thing is to practice the sounds of the language, which are not found in other languages. And where there is a will, there is a way!’